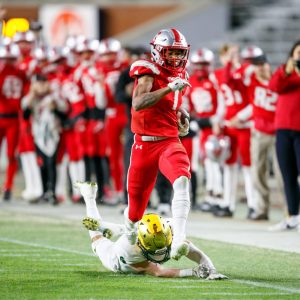 Saraland’s Ryan Williams breaks free for a long touchdown run against Mountain Brook in the Class 6A state championship game against Mountain Brook in December at Auburn’s Jordan-Hare Stadium. Williams could be the first sophomore to be named the state’s Mr. Football in a ceremony Thursday in Montgomery and has already been selected as Gatorade’s Alabama Player of the Year. (Todd Stacey/Call News)

After learning he was Gatorade’s Alabama Player of the Year, Saraland wide receiver Ryan Williams thought more about what is ahead of him than what was behind him — and with Williams, those things are usually far behind.

“As soon as we let Ryan know he won the Gatorade award, he was excited about it and his comment was, ‘Now, we’ve got to go have a great workout today,’” Spartans coach Jeff Kelly said. “That kind of maturity is a reflection of who he is as a person. He doesn’t get caught up in the awards, he gets caught up in the work to do great things.”

Kelly said Williams has the proper perspective about what it takes to win awards, not the awards themselves.

“Ryan has received a ton of awards and recognition but it’s not something he talks about,” Kelly said. “He’s good about hitting the reset button and getting better. None of that affects what he has done from day one. That rubs off on his teammates, how humble he is. And Ryan would be the first to tell you he’s got great teammates helping him do great things.”

After a sophomore season few in state chronicles have enjoyed — “Ryan had a historic year,” Kelly said — the 15-year-old Williams is already striving to get better and do more great things.

“By the time he graduates — and there are a lot of unknowns — he’s definitely on track to be one of the best players to come out of our state in a long time,” Kelly said.

“He just plays at a different level and a different speed,” Kelly said. “He’s also his own biggest critic. With his work ethic and the way he grinds, I think you’ll see Ryan continue to improve. He’s hungry. He’s driven to come out and be better this year than he was last year and that affects our team.”

It will also affect the rest of Class 6A as the 6-foot-1, 175-pound Williams — rated the nation’s No. 25 recruit in the Class of 2025 by 247Sports.com — works to get bigger, stronger and faster and help the Spartans challenge for back-to-back Blue Maps.

“He’s just 15 and his body will continue to mature and grow,” Kelly said. “I think we’ll see him become stronger and more explosive through his work in the weight room. And he wants to be consistent every day — to play and work at a high level every day. He has hit the offseason hard. He’s definitely working to improve day in and day out.”

As a finalist for the Alabama Sports Writers Association’s Class 6A Back of the Year, Williams could also be named the state’s first sophomore Mr. Football in Montgomery on Thursday.

“I think Ryan is definitely deserving of it after the year he had and how he affected games,” Kelly said. “If you ask a lot of the players and coaches he played against, they’d vote for him.”

If Williams is chosen, he would join an exclusive club as only 14 of 37 Gatorade Alabama Players of the Year have also won Mr. Football. The first to do it was Vigor running back Darrell “Lectron” Williams in 1988 and the other Mobile-area players to win both include Leroy quarterback Clint Moseley (2008), Foley wide receiver Julio Jones (2007) and Williamson quarterback JaMarcus Russell (2002).

Kelly began touting Williams as the state’s top player after he wrecked Hillcrest-Tuscaloosa’s defense with six touchdowns in a 56-31 quarterfinal playoff victory during which Williams caught touchdown passes of 68 and 84 yards from quarterback K.J. Lacey, scored on runs of 45, 3 and 4 yards and threw a TD pass. He finished with 8 catches for 240 yards.

“He is just an exceptional talent,” Mitchell said. “(You) might get him here or there but he’s gonna win more times than you do. … He has proven over and over and over with his hands on the ball he’s better than anyone else on the field.”

After Williams was established as primarily a receiving threat through most of the regular season, Kelly began moving him around the formations more often during the playoffs to make it harder to align pass coverage and involve him more in the running game. As a result, Williams became more well-rounded with more runs (42 for 492 yards and 10 touchdowns) than receptions (34 for 689 yards and 7 TDs) in the postseason.

Williams is also now a finalist for the Gatorade National Football Player of the Year award to be announced later this month.

Williams, who has a weighted 3.24 GPA, is also a member of the Saraland High student council, has volunteered with multiple fundraising campaigns to benefit his school, donated his time with Special Olympics and served as a youth football coach.

Other local players who are finalists for the ASWA’s Back and Lineman of the Year include UMS-Wright running back Cole Blaylock (5A), Mobile Christian defensive end Sterling Dixon (3A), Leroy quarterback Brayden Huebner (1A), Leroy defensive linemen Bryston Dixon and Malcolm Pugh (1A) and Millry quarterback Daylon Edmunds (1A). 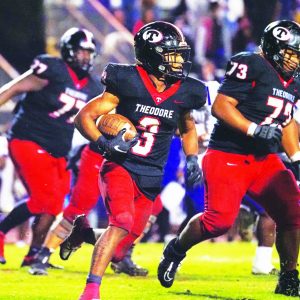 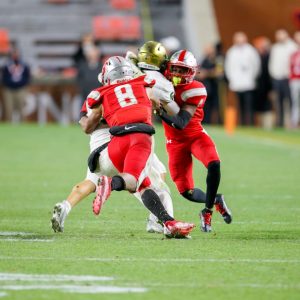 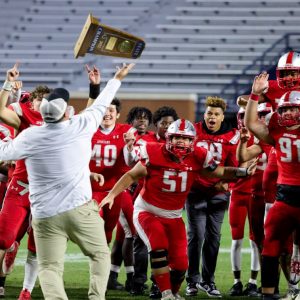