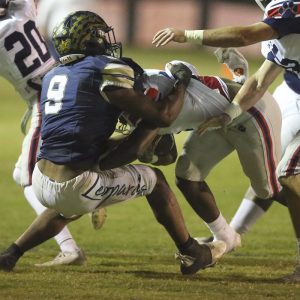 Mobile Christian defensive end Sterling Dixon (9) made an astounding 172 tackles with 18 sacks and 39 tackles for losses in 2022 on the way to being named the Class 3A Lineman of the Year Thursday. (Call News file photo)

MONTGOMERY — Mobile Christian defensive end Sterling Dixon just finished a superlative junior season by committing to Alabama, becoming a three-time MaxPreps first-team All-American and being named the Class 3A Lineman of the Year by the Alabama Sports Writers Association on Thursday.

“Next year, I’m going to try and be dominant,” Dixon said. “I want to put on 15 pounds of muscle. I’m just looking to take over high school football.”

That’s an ominous warning from Dixon (6-3, 211), who had 172 tackles, 18 sacks and 39 tackles for losses in 2022 — all school records — despite, as Leopards coach Ronnie Cottrell pointed out, “Every game they either ran away from him or double-teamed him. But he’s relentless — he’s going to get to the ball.”

The 172 tackles coming from a down lineman is astounding.

“I can hardly remember anybody ever doing that with his hand on the ground,” Cottrell said. “He just has an amazing knack and instinct to find the football. He’s taken it to a new level for us. He has linebacker numbers as a defensive end.”

Dixon also started every game as a freshman and led Mobile Christian in sacks and tackles for losses.

“There were a lot of very good players in 3A,” Cottrell said, “but Sterling definitely earned this recognition. The production he had was really off the charts. This year he was more dynamic as a leader. I’m excited that he has another year to play. I’m looking forward to seeing what he’s going to do in the offseason and the summer and next season. He’s set high goals for himself.”

Before departing for Alabama and the SEC — and Dixon said he is still solidly committed to the Crimson Tide — the four-star edge prospect said he wants his final high school season to conclude with a state championship and is motivated to win a Blue Map after the Leopards were forced to forfeit four wins in 2022 for using an ineligible player, according to the Alabama High School Athletic Association. But Mobile Christian still reached the 3A semifinals and most of that team returns in 2023.

“That’s still on my mind every day,” Dixon said. “I want to get back what was taken from us.”

Meanwhile, Dixon, who has run a 4.59 40, is determined to take away a quarterback’s heart, confidence and sense of security using his awesome first step.

Dixon said before the season he has a three-year plan to reach the NFL and Cottrell said his maturity is reminiscent of former Mobile Christian star Deontae Lawson, who started four games at linebacker for Alabama as a redshirt freshman in 2022.

“But I don’t know if I’ve ever had a player who works and plays as hard as Sterling,” Cottrell said. “His work ethic is unmatched.”

Dixon has paid extra attention to becoming a student of the game, Cottrell observed.

Leopards center Bo Cagle can vouch for that. The 6-3, 285-pound sophomore who already has an offer from Maryland and set a school record with 71 pancake blocks and graded 96% in 2022 said it’s nearly impossible to block Dixon cleanly.

“I hated it,” Cagle said of his battles with Dixon in practice. “He’s like a blur. And he’s strong. And physical. He’s everything you could want. You really have to trust your own footwork and guess where he is going to go. He’s just so fast and never quits. He gets you set outside and his move inside is so good.”

“It’s a blessing,” Dixon said. “It’s something I work for every day and I want to thank my teammates, my coaches, God and my parents for putting me in position to be successful.”

The Mr. Football Banquet was presented by Alfa and the Alabama High School Athletic Directors and Coaches Association. 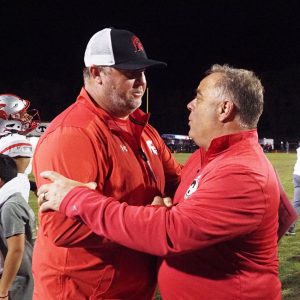 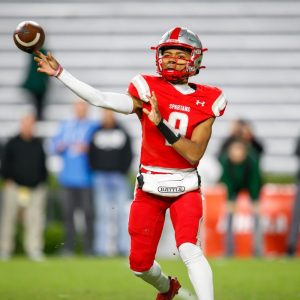 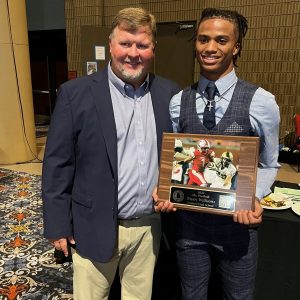